Galapagos Islands. A week in paradise where animals abound and do not fear humans, to the point that we could have touched them if it was allowed. We won’t write a lot this time, just take a look at the photos… 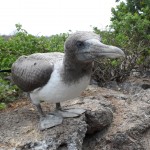 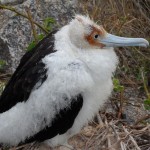 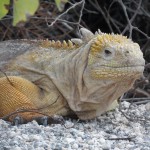 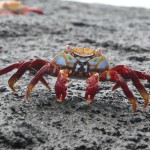 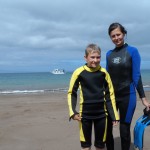 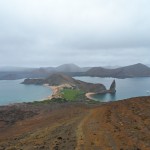 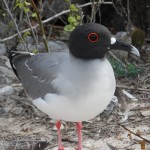 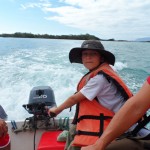 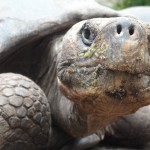 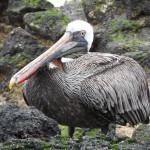 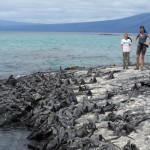 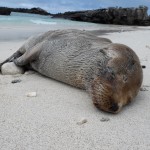 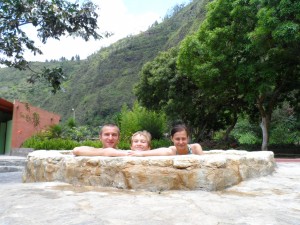 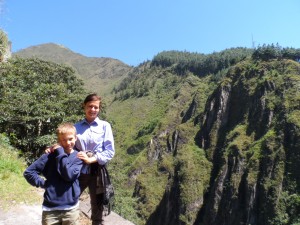 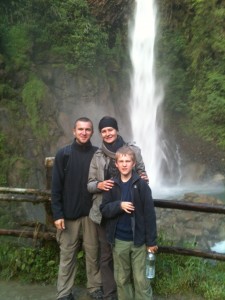 It was extremely easy to arrive in Baños and so difficult to leave. Despite the proximity of the active volcano Tungurahua, which erupted last time at the end of August, backpackers and tourists seem not to take any notice, enjoying warm climate, tranquil atmosphere, beautiful surrounding scenery and surprisingly affordable prices. We followed their example and did not regret it.

Our hotel had a panoramic view on lush, green mountains, one of them with a waterfall, which we could admire from our balcony. We spent here five relaxing, lazy days visiting numerous cascadas, soaking ourselves in thermal baths in the morning and at the night time. In one of the pools we met an Austrian who has been living here for over ten years. He described Baños as the best place to live in Ecuador and we couldn’t agree more with him. It was a shame that we had to leave Baños. We would definitely love to return here one day. 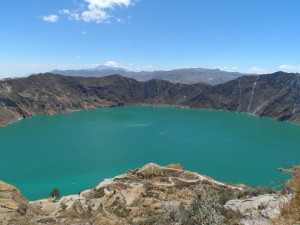 Last Saturday morning we travelled to one of the most beautiful lakes in the world. It is called Quilotoa and is nestled in the extinct volcano crater. It came to existence about 800 years ago after a massive eruption that led to the collapse of the volcano. Over the years the crater was filled with water and it is estimated to be 250 metres deep. Thanks to high mineral content the lake has a magically green colour. 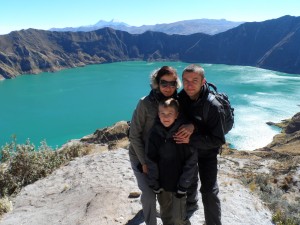 On arrival we paid for a basic accommodation in a hostel run by indigenous people. In fact we had little choice as our tout, little six years old girl was so skillful in advertising her family business that we followed her without a word of complaint. Shortly after leaving our backpacks in the room, we started our hike around the lake, which according to the local people should take from five to seven hours. Once again we underestimated the altitude and our poor fitness levels when exposed to it. The village and the rim of the lake is situated at 3900 metres and walking for four hours was all we could expect from our bodies. Night was chillingly cold. Luckily, in our room apart from numerous blankets we had a small wood-burning stove to warm us up. 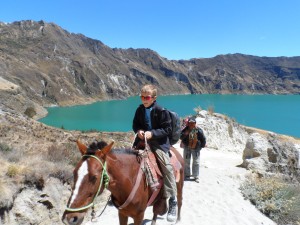 Sunday morning breakfast was prepared for us by the hostel owner’s children. It was so moving to see three little kids, aged 4, 6 and 9, preparing fruits and cooking an omelette. We helped them of course, as we felt a bit uncomfortable sitting at the table, expecting to be served by children. Little later we hiked 400 metres down to the lake. It took us almost an hour and when we got there Ania and Mateusz knew they won’t be able to climb up back to the village. We were trapped and the only way out was to hire one horse to share between them 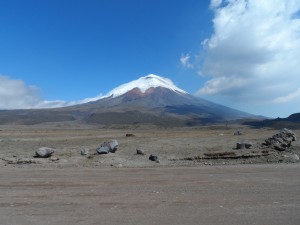 Having been told that Mateusz is too young to climb Cotopaxi we decided that at least we’ll make it to the climbers’ refuge at 4800 metres. Snow line at this time of the year starts just above the refuge which meant that we didn’t need any climbing equipment. We thought it would be an easy hike up the hill. Well, it was easier said than done.

First we needed to have a guide as solo tourists are simply not permitted into the national park. Our guide did not speak English at all but was affordable, helpful and very patient with us. As we crossed the guarded gates of the park it took another hour to get to the car park located at 4500 metres. Despite the beautiful weather conditions, the wind at this altitude was literally blowing our heads off

From parqueadero we were supposed to reach refugio, little yellow hut in the background of the picture, in around one hour. 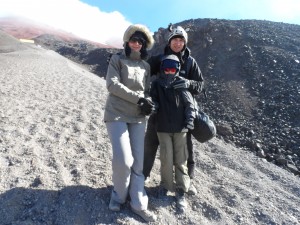 As we started our slow ascent to the refuge we quickly discovered that we had to stop every five minutes to catch our breath. After one hour of climbing at a snail’s pace we only covered half of the distance. And Mateusz started to feel dizzy. Shortly afterwards our guide advised us not to go any further and we agreed it was wise to listen to him. We made it to the altitude of 4700 metres, surely an achievement worth celebrating! 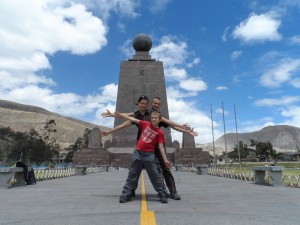 We stood on two equators. Seems they did not tell us the truth at geography lessons at school. In reality we visited two touristic sites that claim to be located on the equatorial line. The former, called Mitad del Mundo, marks the equator that was calculated by French geographer in the 18th century. 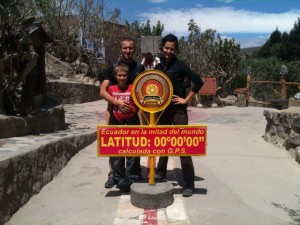 The latter, Intiñan Solar Museum , its location calculated with GPS and placed 200 metres at NE of the original line, claims to be built to mark the true location of the equator. While exploring  Intiñan Solar Museum we observed a series of interesting, quasi-scientific designed to prove that their marking is the correct one. We watched water flowing down a drain counter-clockwise and clockwise, depending on the positioning on either northern or southern hemisphere. We learnt how to balance an egg on its end and we found out that it is impossible to walk along the equator with your eyes closed.

We did some Internet research and found out that both lines do not mark the true positioning of equatorial line. Intiñan Solar Museum is a very entertaining attraction but the experiments can be conducted regardless of the latitude. That did not change the fact that we still enjoyed it. 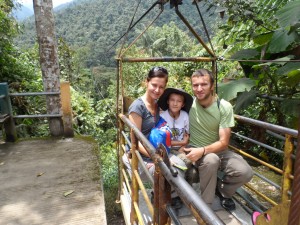 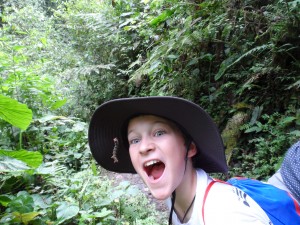 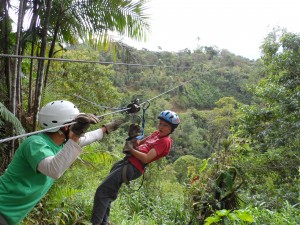 After five days in Quito we left the high altitude and spent two days in cloud forest where we stayed with the Ecuadorian family. The change in scenery, humidity and temperature was astonishing and for the first time in Ecuador we did not feel cold at night. Less than two hours drive from the capital, Mindo Forest Reserve is like from a different world. Ever present thick, dense clouds that increased in numbers with the late hours of the day limited the visibility in the evening to the streets we walked on.

We enjoyed two fun packed, adrenaline filled days, hiking to waterfalls, trying to eat flying caterpillars, travelling in over half a kilometer long tarabita (a type of cable car that comprises a big metal open basket with seats inside) suspended over canopy trees and covering over three kilometres zip-lining above bosque nublado. 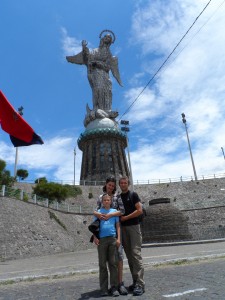 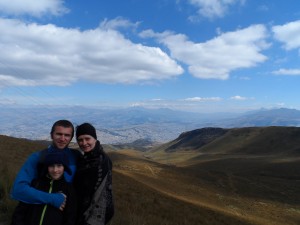 We have arrived in Quito on Monday afternoon, badly beaten, bruised and battered by Mr Jet Lag. So far our days have passed under the theme ‘altitude’. On Tuesday instead of taking it easy we decided to climb El Panecillo (Little Bread Loaf) to admire the city views and the statue of La Virgen de Quito (elevation 3050m). However, that was not enough for us and we finished the day by climbing ‘not for the faint hearted’ towers of Basilica del Voto Nacional.

Today we went on one of the highest in the world cable car, TeleferiQo, which ends its journey on 4100m. From there we continued our journey to the summit of Rucu Pichincha (4680m) but it was not written in the stars for us to reach the top of the mountain. Altitude is a force to reckon with and we agreed to listen to our internal body clocks: Ania just couldn’t go any further and I and Mateusz suffered from debilitating headaches. We decided that there will be many more peaks to conquer and cut the hike short at around 4300m. As a consolation the weather awarded us with the most beautiful, almost clear sky and we could easily see snowcapped volcano Cotopaxi around 40 km in the distance. 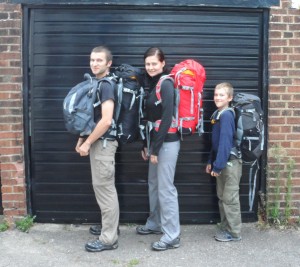 After months of careful preparations, countless hours of internet research, numerous trips to travel shops and years of financial sacrifice the time has come for us to lace the walking shoes and put on the backpacks. Tomorrow at this time we’ll be spending our first night in Ecuador after an all-day long haul flight.

We would like to thank you all for your help, words of encouragement, emotional support in difficult times and insiders’ tips in the run up to our trip. Most of all we are eternally grateful to those who helped us to get through the final weeks before the departure.

A long journey awaits us; we’re sailing into uncharted waters with anticipation and excitement. We’ll keep you updated and hope you’ll enjoy our journey together with us.